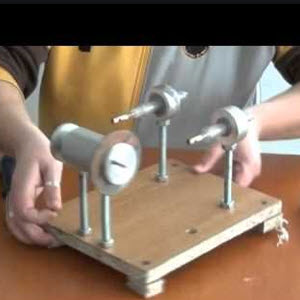 This has a single power piston in the same cylinder and on the same shaft as a displacer piston. The latter is a loose fit piston which serves to move the working gas from the hot zone to the cold heat exchanger. As the working gas is pushed to the hot zone of the cylinder it expands and pushes down the power piston. At the cold end the gas contracts and the momentum of the flywheel helps push the power piston to the hot whilst also compressing the gas. Figure 9.9 is a diagrammatic representation of the system.

This is a variation on the beta engine in which the power piston is in a separate cylinder alongside a cylinder accommodating the displacer piston but sharing a common flywheel. The gas flows freely between the two cylinders. This arrangement is often used in multicylinder engines.